Why Does Economic Inequality Matter? 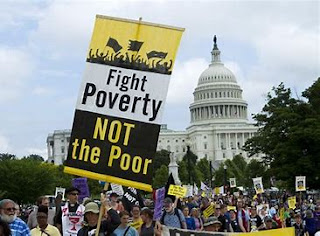 By the Rev. Connie Yost

I think there are three major reasons why economic inequality matters:

1.     It is morally wrong.  We must have an economy that supports everyone with a living wage.

Corporations pay their top executives immense salaries and run up shareholder wealth by buying back their own stock (to inflate the stock price), starving corporate investment in research and development, and squeezing employees in any number of ways: fighting unionization, decreasing wages and benefits, relocating jobs, downsizing through layoffs, raiding pension funds, speeding up production, selling off product lines and divisions, etc.

It is morally wrong to sacrifice the well-being of workers in order to pay executives and shareholders top dollar.  In my mind, there is no justification for the CEO of Dollar General being paid nearly $17 million per year while the median employee earns $17,733 per year, an inequality ratio of 935:1.How Your Pay Stacks Up With the CEO’s (bloomberg.com)

It is morally wrong that, as David Cay Johnston recently reported, “Last year the 237,000 highest paid employees in America together made more money than the lowest paid 60 million workers.”All 60 Million Wage Earners at the Bottom Make Less Than the Top 237,000 Executives — A DCReport Exclusive | DCReport.org

It is morally wrong that while some people make huge sums of money, and there are 60 million workers who make less than $25,000 per year.  The Poor Peoples Campaign estimates that before the pandemic, there were approximately 140 million poor and low-income people in the US, accounting for over 40% of the population and including more than half of the children in the country.

Economic concerns fuels people, even causing them to vote against what seems to us to be their own self-interest.

David Cay Johnson, in the article referenced above, points to the effect the ever growing gap between the highest paid and the lowest paid has on democracy:  "This divide plays a major role in fueling the rejection of democracy by many millions of Americans who, both polls and vote results show, are willing to throw away their liberties in the false hope that a dictatorial system will somehow alleviate their financial stress."

Wealth concentrated in the hands of a few can buy elections.

As of last month, notes a new analysis from Americans For Tax Fairness, 465 U.S. billionaires had pumped $881 million into the 2022 federal midterms. And that total doesn’t even include untraceable “dark money” contributions or donations made during the campaign’s final days. By this election cycle’s end, OpenSecrets reports, billionaire campaign dollars could top $16.7 billion.REPORT: BILLIONAIRE MONEY IN THE 2022 ELECTION - Americans For Tax FairnessPress release: Total cost of 2022 state and federal elections projected to exceed $16.7 billion • OpenSecrets

3.     Economic justice is the lens through which social justice needs to be understood and dealt with.

Racism, immigration, climate justice, sexual and gender justice, disability rights, disparities in education, healthcare, and wealth, etc.  Economic justice informs all of these and must be the lens through which we ground our social justice work.