I fell in love with and “adopted” a Green Turtle named Glitter Mittens.  She came to the Center on June 30, 2019 after she was found floating near Morning Star Marina in Savannah, GA after being hit by a boat. The injury caused a severe head fracture and displacement of her left eye out of the socket. 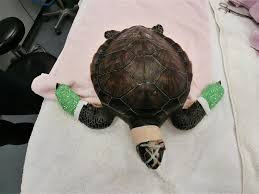 When Glitter Mittens first arrived, she was in critical condition and placed on a waterbed.  They didn't think she would make it.  Once Glitter Mittens became more stable, her left eye was removed and the skull fracture was stabilized. Glitter Mittens got her name from the “mittens” the Center staff devised for her to keep her from accidentally disconnecting the oxygen tubing she needed in the first critical days.

Glitter Mittens is recovering well and is scheduled to be released in the Spring 2020.  As her adopted mother I will be receiving emails and pics from her, and, I hope, an invitation to her release party if they make it a public event.  The staff say that sea turtles, even without an eye and/or a flipper, do quite well back in the wild.  I love you Glitter Mittens!  Mommie