Dreams in the Time of Fear


Dreams in the Time of Fear

The sterility of the bourgeois world will end in suicide or a new form of creative participation.  This is the “theme of our times,” in Ortega y Gasset’s phrase; it is the substance of our dreams and the meaning of our acts.

Modern man likes to pretend that his thinking is wide-awake.  But his wide-awake thinking has led us into the mazes of a nightmare in which the torture chambers are endlessly repeated in the mirrors of reason.  When we emerge, perhaps we will realize that we have been dreaming with our eyes open, and that the dreams of reason are intolerable.  And then, perhaps, we will begin to dream once more with our eyes closed.               --  Octavio Paz, The Labyrinth of Solitude, 1961

I am probably way out of my depth here, but I am going to plunge ahead, anyway.  After all, I am in Mexico, I am a Zapatista and a kind of Catholic, and despite everything, I am a believer.

Believer in what, I expect you to ask.  Well, not in only reason, certainly.  It has its place, I am sure, in the scientific laboratory.  But as Octavio Paz said almost 60 years ago, this path of reason we have been on since the Enlightenment has not brought us to a better place in terms of our social structure, or happiness, or well-being, or ability to simply live without destroying ourselves and the planet.  That’s a pretty monumental failure in my opinion.

I don’t really care who is to blame, and thank god I am not an academic or a philosopher so I don’t have to say all of this is a certain way which will be convincing to someone who will write articles and books and then maybe we will all come to understand this.

No, that is not my job, thankfully.  I am a simple person, highly educated in a certain way, but I know that I know nothing, really, except what I feel in my heart.  And that’s OK with me.

One of the joys and afflictions of aging is memory loss.  I can’t always readily call up to mind the word or fact I want.  I’m not really interested in debate though I like to hear others well-thought out arguments.  I detest being lectured to, but enjoy giving my opinion to those who are truly open to listening.  I try to understand what my heart is telling me, and work with my shadow self, all while trying to stay present in the Now.

We want adequate food, water, clothing, housing, education, healthcare and the ability to make a living.  We want to have hope for the future.  We want to worship in our own way, and live free from fear of oppression and bodily harm.  We want our children to live and thrive.  We want to fall in love and have a fiesta or two.  We want to laugh from time to time.

Is that so much to ask?

It seems that it is, for the many people who struggle in poverty conditions in the United States and elsewhere.

The Rev. Dr. William Barber of the national Poor People’s Campaign often remarked that in the 2016 national election, the word “poverty” or “poor” was never used.  In the ramp up to the 2020 elections, that is changing a little bit.  Still, for many people who have not taken the time to understand what “poverty” and “poor” really mean in policy and living wage terms, it is hard to believe Barber’s statement in a recent article in The Guardian, that “In America today, 140 million people are poor or low wealth.”

Couple that with the lies that are being told by our President and current administration, and you would think that everyone is enjoying unprecedented prosperity except those who are so “undeserving,” i.e. slackers, drug addicts, criminals, “welfare queens” and others who just don’t want to work, that they don’t deserve our sympathy or help, anyway.

Barber counters the President’s recent State of the Union economic claims: “Yes, the Dow is at a record high and official unemployment rates are lower than they have been in decades.  But measuring the health of the economy by these stats is like measuring the 19th-century’s plantation economy by the price of cotton.  However much the slaveholders profited, enslaved people and the poor white farmers whose wages were stifled by free labor did not see the benefits of the boom.” 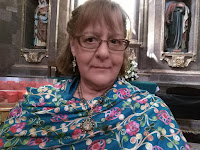 As I mentioned in my previous post, during my time here in Mexico, I have become a kind of Catholic.  I am the kind who goes into La Parroquia daily to light a candle and pray to the Virgin of Guadalupe.  This indigenous mother has become quite real to me, inspiring me to buy an artistic rosary necklace and earrings, set with her image, so that I will have it to pray with when I go home.  I am finding strength and hope in this daily prayer practice, and already one of my main prayers have been answered.

On my recent trip through the Mexican state of Chiapas, I learned a lot about the Ejército Zapatista de Liberación Nacional (Zapatista Army of National Liberation, EZLN) which started on January 1, 1994 (the day NAFTA took effect) as a military uprising to demand justice and democracy for Indigenous peasants in southern Mexico.  In the 26 years since then, the Zapatistas have done much to improve life for indigenous peoples, while the Mexican government remains hostile or unresponsive.

It is an inspiring story of perseverance and success considering the horrific conditions these communities were living in and the real progress that has been made because the people have organized themselves.

In her article “A Spark of Hope: The Ongoing Lessons of the Zapatista Revolution 25 Years On,” Hilary Klein says:

In a moment of heightened polarization in the United States and across the region, it is worth looking back on the Zapatistas’ ability to unite many sectors of society under one banner, and their capacity to remind us what we have in common. The Zapatistas were fighting for land reform and Indigenous autonomy. But they also succeeded in communicating a vision of a just society so universal that people all over the world living in very different contexts from them felt included in their struggle. A quarter-century after their uprising, perhaps the most meaningful, lasting lesson from the Zapatista movement is a spark of hope, a sense of what is possible, even in dark and uncertain times.


… a spark of hope, a sense of what is possible, even in dark and uncertain times.

Especially inspiring is the now radical inclusion of women in real leadership roles, the stated goal of dismantling patriarchy, and the enactment of policies which have dramatically improved the lives of women such as the ability to choose their romantic partner, decide how many children to have, and the banning of alcohol which has led to a significant reduction in domestic violence.  In addition, they are taking on global capitalism with local cooperatives.  They know that they don’t have all the answers, but it is impressive what they have been able to accomplish by hanging in there and taking action.

Meanwhile, we in the US struggle with holding on to hope at all, and live in fear of what else will happen which we feel helpless to stop, that will take us even further from what we all want:  a better world for ourselves and our children.

My hope comes not from myself, and not even from my belief in our collective ability to organize and demand change, though I do believe in that.

My hope comes from dreams and visions, from the thing that creative people call the muse, religious people call God or Goddess or Spirit of Life or Love or that which cannot be named at all.  It is creativity and inspiration and passion and what we too often fear in ourselves and others and try to shut down and shut out, often in the name of reason.  It is understanding that the impossible happens.

Octavio Paz says “The sterility of the bourgeois world will end in suicide or a new form of creative participation.  This is the “theme of our times,” in Ortega y Gasset’s phrase; it is the substance of our dreams and the meaning of our acts.” 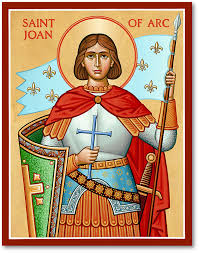 I am thinking of my heroine, Joan of Arc, whom no one could have ever thought would come out of nowhere to do what she did.  An illiterate daughter of a poor farmer, she had the courage to follow the voices and visions that came to her and secure France from the British.

“She insisted, even when threatened with torture and faced with death by fire, that she was guided by voices from God. Voices or no voices, her achievements leave anyone who knows her story shaking his head in amazed wonder.”  (Richey, Stephen W. (2000). "Joan of Arc – A Military Appreciation")

Octavio Paz says:  “And then, perhaps, we will begin to dream once more with our eyes closed.”

For me, he is saying is that the time is now – urgently now – to dream something new, something never seen before, to go forward with eyes closed but with dreams and vision intact.  To be truly wide-awake, “woke,” to the vision and dream of a better world for ourselves and our children.
This is what I mean when I say that I am a believer.

Copyright 2020 Constance B. Yost. All rights reserved.
Posted by Rev. Connie Yost at 7:43 AM