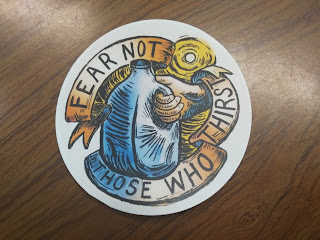 In the gospel of Matthew, these are some of the last words Jesus spoke in public before being arrested, detained and crucified.  He is speaking to a crowd which then demands to know, “Lord, when was it that we saw you hungry and gave you food, or thirsty and gave you something to drink?”  Jesus replies, “Truly I tell you, just as you did it to one of the least of these who are members of my family, you did it to me.”

With these words echoing in my heart, I recently had the opportunity to volunteer with the humanitarian aid nonprofit, No More Deaths, whose volunteers leave water, food and other supplies for migrants in the Arizona desert.  I was not there to help drop water, though, but was called on to be part of a special envoy of volunteers who were to raise public awareness and support for their work and in particular, the upcoming retrial of a volunteer charged by the Federal government on two felony counts of harboring. 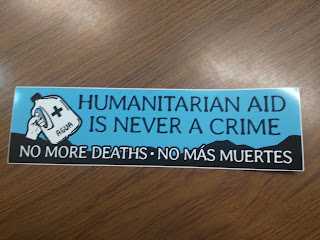 The volunteer being tried is Scott Warren, 36, a college professor and volunteer for No More Deaths who lives in Ajo, Arizona.  His “crime” occurred when he went to the No More Deaths office in Ajo in early 2018 and found two Central American migrants there.  He gave them food and water and assessed their medical condition, calling in the volunteer doctor to treat them for dehydration and foot problems.  As he was talking with the migrants, border control surveillance filmed him gesturing, which led to a third felony count of conspiracy to transport, which has since been dropped.  Scott was tried in June of this year, but the trial ended with a hung jury.  The retrial is scheduled for November 12 in Tucson.  It is no coincidence that his arrest came just hours after No More Deaths posted a video showing border patrol agents kicking over full jugs of water in desert.

I worked with a group of young volunteers for two weeks, door knocking, tabling at events, and phone banking, asking residents to put up a yard sign of support, sign up for the e-news and to offer donations and volunteer support for the humanitarian aid effort.   For the most part, residents were eager to take signs and were supportive.  One woman said, “It’s humanitarian, not political” and eagerly grabbed a sign.  Others told us of how “things used to be,” when Tucson was more open and welcoming to all. 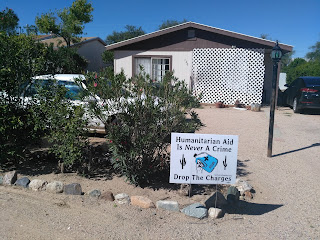 In the small town of Benson, east of Tucson, my young partner, Kavi, and I carefully approached a man who was standing on his porch beneath a military flag and next to his vehicle with many military stickers on it.  We explained that we were asking residents to take a free yard sign in support of humanitarian aid in the desert.  Just then, a woman who might have been his mother came out and said, “You mean for illegals?”  My heart sank, but the man said “Sure, sure, just put it over there.”
There was the occasional pushback.  One woman told me that she wouldn’t support people leaving water out in the desert because that just encourages people to come.  We were told not to argue with people, just to thank them and leave, which we did.  But I wanted to tell her that I was sure that the 6,000 or more people who have died in the Arizona desert in the last several decades did not risk their life hoping to find a plastic gallon of water in the desert.
In my free time I drove over to Organ Pipe Cactus National Monument, southwest of Tucson and directly south of Ajo.  The parking lot of the visitor center was empty except for a border patrol vehicle.  Inside, six young border patrol agents were looking at the relief map of the park.  I tried to surreptitiously eavesdrop on what they were saying, but I couldn’t hear them and then they went and looked at the exhibits.  A man who knew the ranger and seemed to be a local, came in and told the border patrol agents that he was supportive of what they do.  “I know a lot of people don’t, but I want you to know that I appreciate you.” 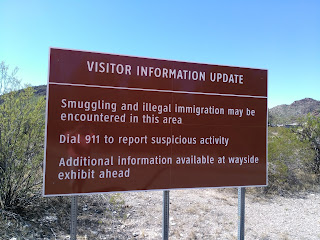 I asked the ranger if they got much foot traffic of migrants through the park.  He seemed a little startled by that, and said that I didn’t need to worry because migrants don’t hurt tourists!  I explained that I wasn’t worried about my own safety, just curious because I was there with the group who leaves the water out.  He said he didn’t know too much about it; someone else on staff dealt more with that.  Park signs warned tourists that ‘smuggling and illegal immigration may be encountered in this area, call 911.  Do not attempt to engage or detain them.’  The southernmost section of the monument’s road was closed, “due to construction” the notice said, and I later learned that is where a newly funded border wall is being built. 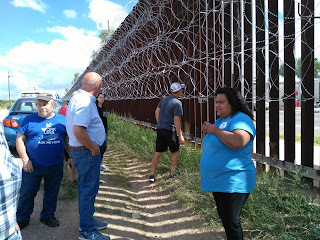 Our volunteer group spent a weekend in Douglas, a small town on the border with Agua Prieta, Sonora, Mexico, southeast of Tucson. We met Pastor Mark and Sister Judy who work with Frontera de Cristo, a bi-national organization that builds relationships and understanding across borders and seeks to respond in faith and not fear to the realities of immigration. Along with a group of Presbyterians from Longmont, Colorado, we drove and walked along various sections of the border wall, learning about the history of the Douglas-Agua Prieta community before and after the militarization of the border. In fact, the 12 miles of 18 foot tall border wall with four rows of concertina wire on it was built in 2012, with wire added just this year. A recent article in the Tucson.com news says that the lower post-and-rail fencing that extends beyond the tall fence will soon be replaced by a 30-foot wall. Money for the new wall was diverted from anti-narcotics funds even though drug seizures show strikingly more hard drugs are being smuggled at ports of entry than through the desert where the wall is being built. 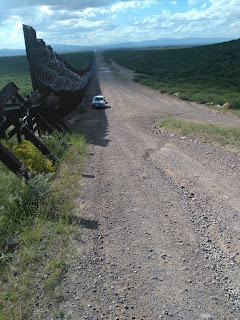 In addition to more wall along the Douglas border, there are also many more agents. Our guide explained that in 1990, there were 15 border patrol agents in Douglas; now there are 600. We stood on a hill where the tall fencing changed to the lower fencing, in front of a border patrol agent sitting in his idling truck. There is a memorial shrine dedicated to Carlos LaMadrid, a 19 year old father and US citizen, running away with drugs, who was shot in 2011 by a border agent while he tried to scale the wall on the US side. He later died at the hospital. In 2016, a US district judge ruled that the border agent was not liable for the death.

All of us volunteers had brought our passports, so we were able to walk across the border (no one checked our passport or even looked at us) and went to the office of the humanitarian aid group in Agua Prieta which assists the migrant asylum seekers who are living in the tent city erected a block away on the border fence. We learned that only the first 10 asylum seekers are in the tent city; the rest of the estimated 650 seekers on the Mexican side are in shelters or living somewhere in the city, and another 650 asylum seekers are on the US side awaiting their court hearing. (In Tucson, we heard that when our government said there were no more shelter beds in the US, Tucson had empty beds.)

We learned that the dangers for asylum seekers in Mexico are real. The drug cartels figured out that migrants are easy prey and have taken over the bus station where migrants arrive, demanding $500 payment before they would let them leave. Now, migrants taxi in or make other arrangements to get to Agua Prieta. 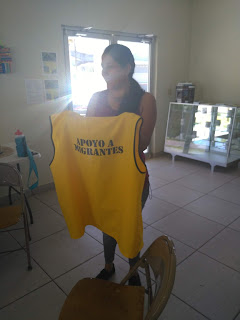 The aid group in Agua Prieta works with local churches on both sides of the border to provide 3 meals a day to the migrants living in the tent city. The migrants come to the aid office to get their meals, go to the bathroom and take showers. The situation is so dangerous with the drug cartels and some police working with them, that the migrants have to be escorted the one block to the office and back. For their trouble, the aid workers are receiving death threats. A fervent plea was made to us for more US volunteers to help in Agua Prieta with the accompaniment, as the cartels won’t mess around with US citizens. I am working with our interfaith immigrant justice group here in Portland, Oregon, to get more volunteers down there.

Throughout my volunteer time, I came back time and time again to those words in Matthew 25 which tell us clearly that our mandate is to help the stranger and those who are in distress. Each person has a spark of divinity within which we honor when we treat everyone with dignity, respect, kindness and care. It is unconscionable that our public policy is designed to harm and traumatize those who seek asylum with us, and leaves already vulnerable persons in even more dangerous situations. It is not a broken system; it is an inhumane system. I can’t imagine a jury that would convict Scott Warren of felony charges which could carry a sentence of up to 10 years in prison, for doing what any person of conscience would do. But even if he is convicted, would that stop us from doing what we know is right? We know that it won’t, and for that I am grateful. 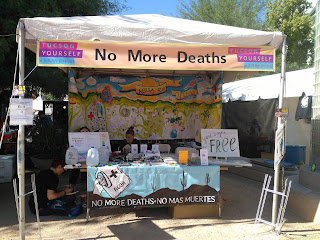 I finished my volunteer time tabling at the Tucson Meet Yourself festival, which was started in 1974 as a way to celebrate and present the living traditional arts and expressions of everyday life of the folk and ethnic communities of the multi-national Arizona-Sonora region.

My young companion volunteer, Emma, and I were able to give away lots of yard signs and people wrote encouraging words in various languages on plastic gallon jugs of water.

Just as our shift was ending, a young man approached me and noted the sign that said, “Agua es Vida” or “Water is Life.” He said that he was a Hopi Indian, and that “we have always known that water equals life.” Emma asked him to write Water is Life in Hopi for us on the sign. He did, and we chatted a little about his life on the rez. “You see,” he said as we were leaving, “young people do have things to teach elders.”

It was a fitting end to my time in the desert, not only as an elder among young adults, but as a sojourner among sojourners, doing what I can, and feeling so much gratitude for all who help those in such desperate need.

Notes: For a riveting account of the history of the Douglas area and the story of one undocumented woman who straddled both sides of the border, read The Death and Life of Aida Hernandez: A Border Story by Aaron Bobrow-Strain, a professor at Whitman College in Washington State.